EContent Magazine knows any marketing campaign worth its salt needs to carefully optimize its visual content. After attending the Future TV Advertising conference in London, the magazine featured our CEO Chris Christodoulou's insights into neuroscience testing and imagery. 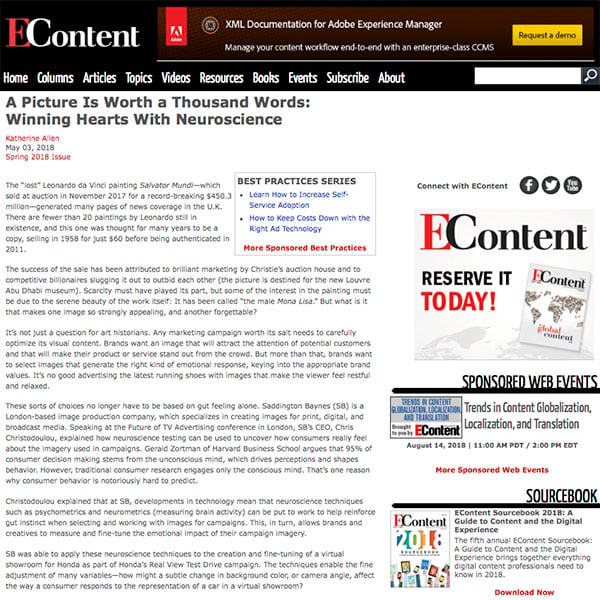 Brands want an image that will attract the attention of potential customers and that will make their product or service stand out from the crowd. But more than that, brands want to select images that generate the right kind of emotional response, keying into the appropriate brand values.

These sorts of choices no longer have to be based on gut feeling alone. Saddington Baynes (SB) is a London-based image production company, which specializes in creating images for print, digital, and broadcast media. Speaking at the Future of TV Advertising conference in London, SB’s CEO, Chris Christodoulou, explained how neuroscience testing can be used to uncover how consumers really feel about the imagery used in campaigns.

Gerald Zortman of Harvard Business School argues that 95% of consumer decision making stems from the unconscious mind, which drives perceptions and shapes behavior. However, traditional consumer research engages only the conscious mind. That’s one reason why consumer behavior is notoriously hard to predict.

#ReggiesTopTips for working from home
Coronavirus: how we can help you
Key Takeaways from IIeX EU 2020