How Well Do You Know Your Target Audience?

In our previous SBBlog, 2020: The Good, The Bad & The Emotional, we took a trip down memory lane and reviewed 2020, a year of many highs and lows. We tested, measured and reported how we really felt and the results were awesome! Using our ground-breaking neuroscience service Engagement Insights®, we delve further into the insights to uncover how a year in lockdown impacted us across different demographics - specifically age and gender.

For the purpose of this study, we've categorised our respondents into two age groups: over 40s and under 40s, and into people who identify as men and women.

Using our CGI and neuromarketing expertise, we're able to gather both implicit and explicit data. For this project we tested both in order to understand how people think they felt about 2020 vs how they actually felt.

Need a recap on explicit and implicit testing? Refer back to this SBBlog.

First, we asked explicitly, how each group felt about 2020, then we measured their implicit responses to 12 images of #TortelliniTheTortoise, a campaign our artists created to represent each month of 2020. 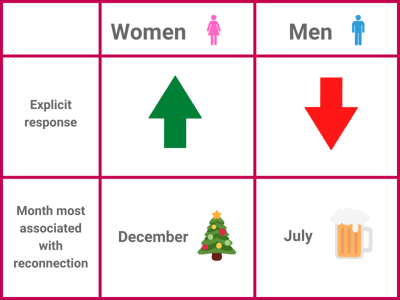 After asking men and women about their overall 2020 experience, we found they had very different responses…

Men had a 120% more positive response than women.

Women - 90% had a negative emotion - Negative and Sad were the most common responses, each of these emotions making up for 20% of the total female answers.

The stronger negative responses from women could be due to the fact that women have been disproportionately affected by the Covid-19 pandemic, particularly in terms of job losses. The hospitality, retail, leisure, tourism and arts industries took the hardest hits which generally have more female employees. [1]

When split by gender, imagery for December represented the strongest sense of reconnection for women. This could be due to the togetherness and family element associated with Christmas, as well as the end of 2020, a negatively perceived year, in sight.

This sense of reconnection significantly grew when they were told which month it represents, rising from 47% of women who didn’t know the month associated, to 61% of women when the month was labelled. From this we can understand that by simply labelling the images, people have greater associations with the reconnection felt in December.

Over half of men felt July’s image had a stronger feeling of connection when compared to women. July’s image depicts a pub, the responses to this image could show that men’s priorities and happiness is focused on the social aspect of drinking with friends, rather than the family focus that women selected. 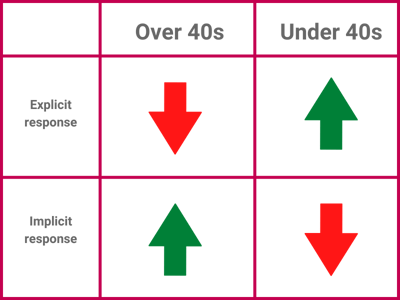 When split by age, we found that both groups reacted negatively to 2020. These were their responses…

Although a similar negative response, not many people from the older category thought they felt lonely.

When we tested their non-conscious feelings towards the imagery, the perception of the groups changed drastically.
Under 40s perceived the imagery as 96% more positive than over 40s.

Suggesting implicitly younger people have a more positive outlook on the story of the year vs their explicit emotions. This might surprise you, as arguably life has been halted considerably more for under 40s - in terms of socialising and activity levels. However the increase in use of social media and mobile devices amongst people aged 18-19y is significantly higher than any other age group [2], allowing for a greater sense of connection.

In summary, we know everyone is saying how they think they feel. But using neuroscience techniques we can measure implicit responses to unlock key visual ingredients within imagery and understand how people really feel. Applying this to your brand will optimise both your creative and your marketing spend, ensuring your campaigns elicit the responses you intended and engage your audience.

Discover how we can elevate your campaign imagery using neuroscience.

Watch the full recording of Brandingmag's live panel discussion now!
How Well Do You Know Your Target Audience?
How To Create A Fantastic Retail Experience That Keeps Bringing Customers Back For More