World Cup Activations – How FIFA Got Personal for 2018

Emerging audience research and entertainment technology is leading to ever more personalized advertising, and the shift was especially obvious in the midst of this year’s World Cup fever. A simple television campaign is no longer enough to hook FIFA fans–the shift to digital and social platforms allows for a new wave of engagement and audience interaction.

FIFA’s World Cup traditionally draws the largest viewership of any televised event worldwide, broadcasting to 3.5 billion people in more than 200 countries. But 2018 might just mark its most wide-scale reach to date, having pushed an estimated $2.4 billion into the global advertising market.

The best FIFA 2018 campaigns utilized the power of personalization in emerging technology, creating content at scale across multiple platforms. 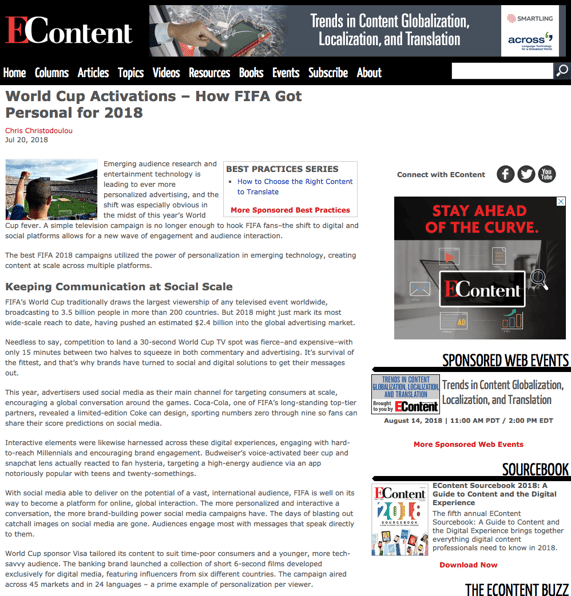 This year, advertisers used social media as their main channel for targeting consumers at scale, encouraging a global conversation around the games. Coca-Cola, one of FIFA’s long-standing top-tier partners, revealed a limited-edition Coke can design, sporting numbers zero through nine so fans can share their score predictions on social media.

Read the full article on EContent

#ReggiesTopTips for working from home
Coronavirus: how we can help you
Key Takeaways from IIeX EU 2020